Autistic with spoons? Autism and spoons? Here’s my attempt at a variation on the spoon theory.
We all have spoons. There are no stereotypes for spoons. Everyone’s spoons are different, everyone has a different numbers of spoons which fluxuate. Everyone uses their spoons in different ways. And maybe your spoons don’t even look like spoons!
I think I know my own spoons quite well, I have learnt to recognise (and respect) them as I have become older. Some spoons I can hide. C seems to know when I have lost a few spoons!

And C’s spoons from motherly intuition and my perception of them over many years I have some sort of idea. But I have no idea how many C has at any one time. He has ones for many more things than I do - noise, light, colour, smell, sharing personal space, things around him, movements, processing, feelings, thoughts, communicating, bodily functions, positions, health, head banging, keeping clothes on, standing up, rocking, flicking, eye poking - and many many others I just have no clue to. Nor no clue as to how they really affect him. Before during and after juggling. 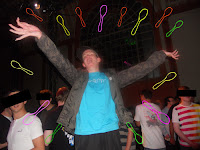 Some days C is better at juggling his spoons than others.

Some days he may have woken up with fewer or more spoons than usual?

Some days some spoons maybe bigger than shovels and C is intensely aware of spoons that he can usually ignore.

Social interactions for C uses up lots of spoons so he very rarely does it and then only if he has spoons in abundance. Making him ‘appear’ severely socially isolated.

C’s spoons do not conform to many NT spoon rules. C’s spoons can be extreme - obvious or invisible. C’s spoons like to keep me on my toes :)

Some days C drops his spoons one by one – if I have been watching closely I can see this happening and sometimes I can distract him, divert him or remove him where possible before he loses too many.

We have both learnt different tactics for clutching on to the few remaining spoons. C learnt to put his fingers in his ears, to hum, to rock, to focus on an object (used to be a chopstick now it’s his thumb nail).

I have learnt where to position him, distract him with my predictable movements or by mirroring him, using behaviours he recognises, or maybe playful ‘ritualised exchanges’ like I kiss him on the nose with my finger. This seems to sometimes ground him (if he hasn’t lost too many spoons by then) or my making happy sounds that he makes. Looking deep in his eyes - Positive and reassuring. Etc

But if C didn’t drop them one by one, if all his spoons just spectacularly crashed and there is nothing he or I can do and he over loads, melts down, fragments – whatever you like to call it. All I can do to help him is to get him to a safe quiet place to recharge/process/pick up some of his spoons.

And I do the same as I also will have lost a few by then.

On reflection there is always something to learn, something I may have missed. And so the next time I try something slightly different (yet familiar and recognisable). We have built on this and evolved our routines opening up C’s world. I learnt to read the function of some of C’s spoons by being sensitive, mindful, watching and listening. It’s been hard work and some things have taken years - but C’s arsenal of spoons that he can juggle is growing and changing all the time - it has been so worth it and now we can go just about anywhere. And try anything.

We have a connection. He trusts me even when I get it wrong sometimes and drop the odd spoon.

LOVE your writing about spoons.

And that picture of C is really good too.

Thank you for this. And agree with Adelaide - wonderful picture of C. x

Love that theory! I guess you didn't want to have to be so amazing but you really are! Have you thought about writing a book? People like me - at the start of their journey with their children with autism - can learn a lot from you.....

It’s it wonderful when the spoons have that extra gleam, although the following day it could be that a few get stuck in the mud and you need to pull them out.

That is a very inspiring spoon theory! I think it's that beautiful dance moms and their kids have, mirroring, anticipating, understanding on a deeper level. I can totally relate to spoon theory with my own child- I don't notice it so much at home but out amongst others I start to notice what I am doing with my spoons and my daughters.

The spoon theory is very good. We all have them but I have never thought about them in that way before.
Lets hope we don't lose too many or drop them.
It must be awful to be out of control when they do all fall together. Frightening for C & everyone else.
Thanks for explaining things.
Maggie X

Elf collects plastic spoons! And he must always eat with the small "elfie" sized spoon at the table. I like your analogy... every day is different. :)

That is such a great post and applicable to all of us in some way.

It's good that you and C have each other to mind your spoons and watch your backs!

Love the whole theory on spoons - brilliant! This is something we ALL can learn from, so thank you!

"like I kiss him on the nose with my finger. This seems to sometimes ground him."

Wishing you and C a beautiful day!

P.S. I agree with Kristina, have you ever thought about writing a book?

This theory makes the entire situation so CONCRETE in my mind. Wonderfully writ, Casdok.

It seems like there must be a sign on the door of my son's school that says, "No spoons allowed!" and that most of my time is spent trying to figure out how to sneak them in.

Hopefully I manage the spoons here without thinking, I certainly wouldn't be as conscious and aware and on top of everything as you are xx

the photo is wonderful!!

it never occurred to me to try and see the spoons in other people, especially those who hide them
thanks for that

You are a great writer. I enjoyed reading this post.

"He trusts me even when I get it wrong" That is everything right there isn't it? lovely lovely post...

Love the spoon theory (I've shared it with a lot of people over the years) and also your special C-variation!

Of course C trusts you. You are his mum..... the fabulous Queen of Spoons ;-)

Such a beautiful way to express his sensitivity to things around him.

Both my wife and I recognize when the spoons are falling, and both of us help pick them up. It's only that my wife knows the correct order in which to do so.

What an awesome way to describe how you and C cope with your day to day activites!

I'd never heard of the spoon theory before...thanks for this.

I have just read the 'spoon' theory & think it is brilliant. I have been 1 of the very lucky ones to recover from ME/CFS or whatever you want to call it, which is a horrible, debilitating illness which many people still pass off as stress, or yupie flu as it was known in the late 80's when I had it as a teenager. To have been able to explain it using the spoon theory would have been brilliant. I don't think I have ever related to a description so well. I can also see this fits for aspergers and most things, and I think its a theory I will carry with me now. Thanks for posting the link and for your version.

What a brilliantly written post. In autism as in regular life, we all drop the spoons sometimes. The hard work is picking them back up and learning from it.

Such a sensitive and wonderfully written insight into your life with C.

The peace of information about the C’s spoons from motherly intuition,is pretty good and amaizng and also the picture relating to it,is also brilliant.

What a great post, I certainly agree. I remind myself often, that my daughter may have woken up with less spoons than the day before and my patience will have to adjust accordingly. You sound so insightful of your sons needs.

I have searched (Autistic with spoons) on many search engines.You have written it very well.Thanks.

I believed it was going to be some boring old post, but it extremely compensated for my time. I will article a link to this page on my weblog. I’m sure my visitors will uncover that pretty useful.