Whilst waiting to move C from his present group home I have been having C home more. In the last couple of years he has been more receptive to going to new places which is fantastic. So in a bid to try and wear him out (he doesn’t sleep much) we have been trying new things. But i only seem to wear myself out! The latest was Do-nutting (as we are not bound by risk assessments!).

Here’s a short video clip to illustrate what it is...

Trying to get C to sit in a Do-nut was a feat in its self – and took some practice! 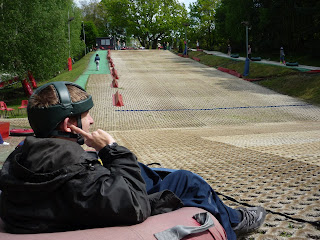 After I had manoeuvred C into positive and then got myself seated my do-nut – I looked up and C was gone! You’re supposed to wait till everyone is ready and then all go together! I had to run down the side of the slope to catch him up as I knew he wouldn’t know what to do at the bottom and wasn’t sure how he would respond to a member of staff talking to him. I only managed to beat him down the slope as he was using his size 10’s as breaks!!
That was the only mishap. 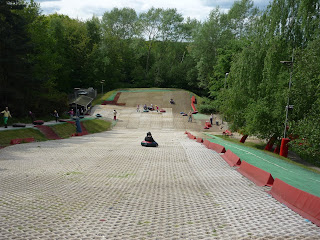 C needed a bit of time out after that in the furthest corner. 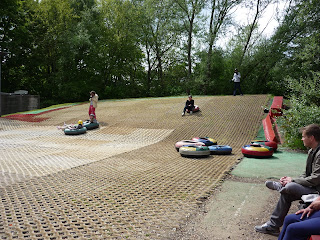 This time he held on till i was ready. 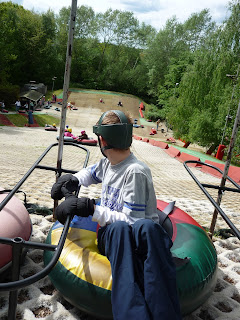 Great fun! The aches and pains the next day were worth it!
We are top middle on way down 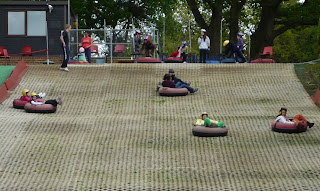 Over the last 20 years I don’t know how many letters/emails/phone calls of complaint I have made advocating on C’s behalf. I try and make them constructive and have had some very positive outcomes not just for C but for others to. I have changed attitudes and some policies.
But it can be very wearing. Having a good social worker on your side supporting you can make a lot of difference. I have been very fortunate with my social workers (on the whole). Social services tend get a bad press, and yet many work tirelessly. As well as complaining I also think it is important to give praise where praise is due. So when I saw Health and Social Care Professional of the Year Award were looking for nominations – I nominated my social worker. My nomination has been accepted and we both have been asked to attend the award ceremony next month. In the mean time they are sending a film crew to film both my social worker and I and possibly C?!
Posted by Casdok at 07:36 88 comments: