Abuse on a large scale is not just happening behind closed doors as in the recent exposure at Winterbourne but in the community - on the streets - in public – by the public. Disability Hate Crime.

I did not realise that people calling C names or expressing hateful opinions about C is verbal abuse – and is a Hate Crime. Over the years I have accepted the staring, muttering, making comments as part of C’s life. Not only did I accept it but I expect it every time I take C out. It is part of our lives that I have had to get used to so it doesn’t get to me. Thankfully C is oblivious to it (as far as I can tell)

This is the type of prejudice that inspired me to write my rap – if C could speak.
C’s invisible disability is very visible! And there have been times I’ve felt harassed and in danger.

I recently had some training in Disability Hate Crime which touched on genocide. And with Panorama still fresh in my mind I have decided no more! The kids/adults muttering abuse – calling C names (and we live in a respectable area) have been getting away with it as I have been ignoring it I now realise could be the predatory corrupt caregivers - the emotional and physical abusers of tomorrow.

Disability hate crime is a direct attack on a person's identity and an infringement of their human rights, perceived by the person or any other person.
It doesn’t matter that the person doesn’t understand it.

There have many headlines over the years of the failure of the police, prosecutors and some care organisations to take Disability Hate Crime seriously. Fiona Pilkington being a very high profile case – after it was too late. A mother who killed herself and her daughter because no one listened.

Unless we as a society recognise what disability hate crime is and start reporting it nothing will change.

I reported my first Hate Crime last week and was impressed with how the local police dealt with it. They couldn’t follow it up but it has been added to the statistics – I’m sure I will be adding many more.

By reporting this will help the police get a better idea of the level of hate crime in your local area and improve the way Police respond to it and could prevent escalation of seriousness. More funding and resources maybe allocated. 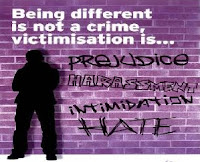 On C's behalf - I am not going to accept it anymore.
Whats your experience?
Posted by Casdok at 17:05

Good for you. I'm glad the police took it seriously.

It takes a lot of bravery to stand up to hate. Keep up the good work.

Fight the good fight! I'm glad you reported it. Hopefully more people will do the same.

Of course you should report it. Some people are so unaccepting of any disability and downright rude with it, they shouldn't be allowed to get away with it.

It makes me so sad to think that you are both going through this. Glad you are making a stand.

Glad you are taking a stand. Your point about those who are doing the "subtle" abusing now may well be the abusive carers of tomorrow is a sobering thought, indeed.

Sending you and C nothing but good thoughts.

Can I just say to Suburbia, don't be sad about it, be mad and do something. Don't accept it and feel bad for someone, that does nothing to stop it happening.

We need to all be watchful. There seems to be a wave of abuse and hatred towards anyone who can't be classed as *normal* Well these abusers are not normal, are they?
We need to try to re educate people even if its in a small way at least we are doing something.

Good on you! And thank you for the information!

Your passion is so inspiring. I couldn't sit idly by either.

Thanks for using our symbol Hate Crime symbol.
You can find the national Disability Hate Crime Network on facebook at https://www.facebook.com/group.php?gid=304401563986

I'd not really thought about it that deeply, as my children are younger, it's mainly stares we get, or comments from adults telling my son to behave! But I think just taking our children out into the community is the first step: children especially often ask in a friendly way about Smiley, so I'm assuming they've never seen a teenager in a buggy before. Aspie boy still just confuses people, no obvious disability so why is he skipping along, flapping his hands and singing to himself (he doesn't always do this btw)?

Good for you. It's staggering to think that people can behave in such vile ways to others.

I had no idea that there was a name for it and thank you for making me aware. We get the looks and some comments but nothing too serious so far as Jude is only 6. His big brother does hear and suffer from the comments about Jude though.

I can't help feeling that more educational programmes should be put in place in junior schools to educate kids at an early age about disabilities and how to react to them. So much hatred comes from fear and if the cycle could be short-circuited early on I think this could have a huge effect. I agree with Looking for Blue Sky that the first step is taking our kids out in the community - getting people used to people with disabilities on a daily basis.
All of that is easy for me to say though as we haven't (yet) been subjected to any real hatred. I would happily report anyone who crossed the line from curiosity to abuse. And now I know that I can. Thank you xx

It beggars belief that hate crime is happening, perhaps I live too sheltered a life. There are many kids at Amy's school who have now latched on to the fact that Amy is "different" to them. So she gets picked on. It's one of the reasons why we've moved her to a different school. It's disgusting in any form and when I see other kids being so hateful and hurtful, it confirms how little hope there is for them when they become adults.

This is so very important to understand. Thank you for sharing it! Many parents don't realize the significance of verbal abuse and how it can affect a child's emotional state well into adulthood.

Good work on highlighting (and reporting) such an important issue.

I am always astounded-especially on the internet how the message of hate and disgust is allowed on comment threads..So many believe it is their "right" to say what they believe..yet forget about their "responsibility" to other human beings...it unnerves me. Important post-thank you.

It's wonderful that you have stood up and done something about it.

There are a lot of people out there suffering and many cannot defend themselves.

Social education from an early age is crucial.

Thanks for sharing this with us.
Px

Thank you for such a informative blog post. Our daughter has Aspergers, and sometimes is bullied at school. Everytime she tells me, I talk to the teacher. I let her know that if talking to her doesn't help stop it, I'll go higher until it stops.
Dianne

The other piece of this has to be educating kids at an early age to understand and reduce the teasing before it gets to he level of prosecuting.

Just wanted to let you know that I shared this post on my news post yesterday. I really loved it. http://speakingonthespectrum.blogspot.com/2011/06/autism-news-for-saturday-june-18-2011.html

I wish everyone spoke out against hate and discrimination.
I hope I have raised my children to be accepting of EVERHYONE , no matter who they are or how they are.

Hi jen good for you! u never know u might meet a handsome policeman. id love to date a policeman.lol.

I walk with a cane now and I can't tell you the number of times I've heard people mutter behind me that they'll never get past me, that this will take forever and so on.

It always makes me angry and I try to take a deep breath and say something to the person hoping to make them aware of how their words have consequences.

MOTHER OF MANY said...

It is good to see that Winterbourne is to close on Friday. One small step.

So happy to see you are standing firm! You are a wonderful Mama to C!
Much love, Tina and Boys

I hadn't realized this - I will have to look into good our local laws on this - thanks for posting about this topic.

Taking a stand alongside you. xo

Thank you, Mother of Shrek. Thank you, thank you, thank you for writing this post and raising awareness because it is definately a hate crime to verbally harrass our children because they are different. Oh my goodness, it just infuriates me that people can pick on the most helpless, innocent, people of all.

I am so sorry you've had to endure this. I know you will do whatever it takes to protect your son.

Great post! Thank you for putting this out there. This is also something very near and dear to my heart and take it very seriously when I see hate crimes of any kind happening.
Hope you and C are doing well my friend. Please know that you two are often in my thoughts and prayers.
Be well.
xxxx

I am so proud to have met C recently - and I found him a perfect gentleman. xx

Silence is not acceptable. I'm glad you said something. And glad too you shared. Thanks.

I LOVE that you blogged about this, we have seen it so often! My daughters have taken a pledge with "Spread the word to end the word"
Anyone wanting to can go here (www.r-word.org) for more information

That's why I say that humankind is less developed nowadays or at least the same, as it was in the XV century.
If one thinks wisely, in which important aspects did humankind progress ? Practically nothing.
Of course that we can talk about medical and technological progress, but that's expectable, just as it progresse from the stone age to the Egypts or the Illuminism and Renaissance.

But did it got wiser and more comprehensive in terms or human relations. I don't think so.

I often ask this: if someone was condemned to be burned in public, would people stand against it, or would they get their cell phones and put it on Youtube ?

I reported my first Hate Crime last week and was impressed with how the local police dealt with it. They couldn’t follow it up but it has been added to the statistics cheap elo boost
Cheap League of Legends Coaching